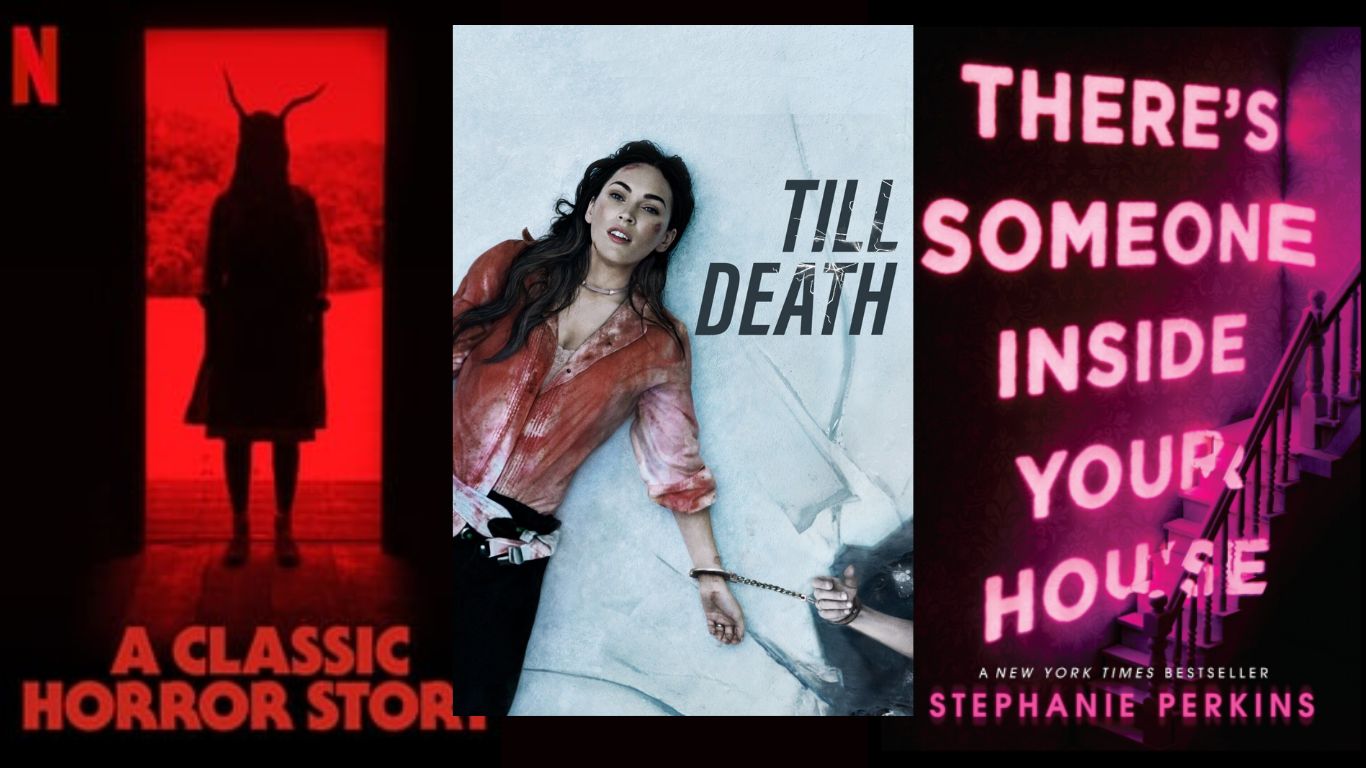 There’s nothing quite like a good horror film. Whether blood and gore or mystery, a good horror flick will pump your heart like no other. Netflix has an extensive collection of horror films to check out. Pick between new and classic horror movies, each having its own USPs. From A Classic Horror Story to Till Death, as well and The Conjuring , each film is packed with some of the scary movies you’ll ever watch on OTT. So, what are the best horror films to stream on Netflix?

Contents Table hide
1 Top horror movies on netflix
1.1 A Classic Horror Story
1.2 There’s Someone Inside Your House
1.3 Till Death
1.4 Coming Home in the Dark
1.5 The Conjuring

A Classic Horror Story tells the story of a group of strangers who become stuck in a terrifying situation in the forest. The film is full of blood and gore. It is not suitable for those who are uneasy but is ideal for those who have long been fans of horror.
In the film, the characters travel through a remote area of Italy, an accident happens in the night, and their car smashes into a tree trunk. The next day, they awake to find that most of them survived the crash without injury. However, their vehicle is different from where it’s supposed to be.
The film was put together by a team of creatives obsessed with every bit of detail of the horror genre. In the same way, Cabin In the Woods (2011) successfully blended several different concepts into a narrative; a Classic Horror Story has a similar approach. The final product is entertaining but not what it initially appears to be.
The entire film is about using recognizable movie tropes to tell the story. The film is based on the familiarity and understanding of horror, and anyone who leaves in the middle, thinking they’ve experienced it all before, must get the message.
Some characters get killed too fast, and a scary dinner scene could have been more disturbing to watch with an extra minute or two. This particular scene is one of the film’s best moments and occurs before a pivotal event in the story, which is why I would love to see the extended set.
If you’re a horror enthusiast, give the film a go. I also suggest you watch the movie using English subtitles.

There’s Someone Inside Your House

Makani Young lives with her grandmother to escape her past. However, when a serial killer begins at her friends with the help of secrets, she’s forced to confront her inner monsters to stay alive.
The movie didn’t drag its feet out. Much like Scream or Fear Street, it started with a slasher-esque opening that gave the audience plenty of gory deaths to make it an appropriate slasher movie. Specific killings were quite gruesome, and they helped balance the teen melodrama on display.
We have been exposed to their past, secrets, and fears when they were exposed to their true identity. They soon realized that they could present “a face” to the public; however, they were being honest with themselves. The more they recognize who they are and accept who they are, the more likely they will be able to get their past and become more successful in the present.

This movie was a powerful story with a message and made me connect with the characters better than the typical Slasher.
Like Scream, I spent most of the film trying to unravel the motive behind the murders; however, when we finally got to the principal announcement, I was a bit surprised. It wasn’t bad and didn’t seem obvious, but I was hoping for something more shocking.

The movie starts, and Emma is on her way to take her husband to an eatery. She’s thinking about the man who she recently parted with her, the one she’s been having an affair with and has been able to break up with.

She is in an elevator along with her husband, who appears absent. The doors are open, and she is greeted by her boyfriend, who works in her husband’s office. They seem not to be friends, but her husband’s face suggests that he has a suspicion about what’s going on.

Emma maintains a quiet silence, but she’s clearly feeling unwelcome and cold toward the two men and is nearly pushed off the floor.

If they go out to dinner for their wedding anniversary celebration, there’s tension between them, mainly when they give each other gifts. The husband gives her an ornament that he promptly wraps around her neck. Meanwhile, she presents him with tickets to a game the man doesn’t like since the team isn’t doing well. Emma is irritated by his way of putting the necklace on and dismisses her present, which eventually goes to the waitress once they go home.

But before they even do it, Emma sees a woman proposing to her and does not clap for her. Instead, she confronts her in the bathroom, telling her that her stunning proposal will disappoint her. The woman advises her to focus on her business and then walks away.
Emma has now also taken his coat. She is arrested by a robber who has snuck into the Cabin to take diamonds. They threaten to slice off her feet until she discloses her safe number. There’s nothing to worry about because the two thieves fight among themselves, which leads to the younger one being killed after it’s revealed that the diamonds were in Emma’s necklace and they won’t be able to come off. There was an answer in a piece of jewelry that Emma’s husband left behind, suggesting the best way to gain the diamonds was to take them off the neck of Emma.

The film is entertaining with the story of revenge is disturbing. However, the constant chase scenes are monotonous, and the flimsy stage where the robber develops feelings of sympathy for Emma ruins the enjoyment.

Coming Home in the Dark

The title Coming Home in the Dark suggests that Hoaggie and his family set out to have a picnic in the wilder, colder remote New Zealand areas and return after the day has ended. But how their paths cross Mandrake and Tubs ensures that their plans get ruined beyond repair, and shattered and shattered, but the damage is not only physical. The violence is slyly carried out with chilling precision and always accompanied by Mandrake’s forensic analysis of the events, such as a vicious combination of Australian revenge-maker and the Horseman and the well-mannered allegations and stabbing consequences from John Patrick Shanley’s Doubt. Director and co-writer James Ashcroft looks at how monsters are constructed, as his real goal is to expose the horrible legacy of violence that has been imposed by New Zealand’s Borstal system. Complicity and brutality are hidden in the past. However, they have a grotesque way of pulling themselves from the grave where the less literal bodies are laid to rest.

Empathy is destroyed and transferred when the dark secrets are revealed; however, Ashcroft acknowledges that he has created the ultimate beast in Mandrake. It’s Gillies her performance that takes Coming Home in the Dark from intriguing to frightening and is a perfect match for Matt Henley’s cold filmography, with its angular style as well as John Gibson’s music featuring all reed instruments as well as lengthy, clear lines over strings, as the icy winds blowing through the dead grass and bones. However, Gillies brings out a rare, unnatural delight in Mandrake’s measured brutality with glimpses of a child who has been smashed under. Conversations about nurture versus nature, causality versus accident, and shades of evil are evident and never feel forced. It’s a delicate balance between the visceral and cerebral that Ashcroft is balancing and a critique of the cycle of powerlessness which leads to abuse. “Coming Home In The Dark” is the message of bleakness and despair that there is no way to fix the mistakes from the past. And no restoration grace can stop them from destroying the illusion of peace present. Instead, you’ll have to pray that these mistakes aren’t repeated.

The Conjuring is the place where we begin. We get to know Ed as well as Lorraine Warren. Ed and Lorraine are paranormal phenomena investigators who happen to have an area in their home full of cursed and haunted items. This is basically the element that holds the universe together. Within the room, we will discover Annabelle and many other things that connect the universe. Let’s focus on Lorraine.
Lorraine is a clairvoyant. This means that she can see things in the near future that are not able to be detected by the realm of sensory contact. This might not be the most obvious sense; however, if you see only the first Conjuring, you’ll know what it means. However, what you have to do is that whenever Lorraine assists with the case, a tiny part of the case is an integral part of her. This is how we enter The Nun. The Conjuring 2 is The Conjuring 2. The Warrens and Lorraine, particularly, are haunted by Nun. How did she arrive?

A few years later, when an orphanage is located at the Mullins location, the demon gets hold of a girl named Janice. In the final chapter of Annabelle’s Creation, we see that Janice is still haunted, has escaped the orphanage, and was eventually adopted. It sounds like a happy ending, but because Janice is raised as Annabelle and a part of a satanic religion. In the end, the grown-up Janice (now Annabelle) kills her adoptive parents, her boyfriend, and later herself. In addition, it’s discovered that the Annabelle doll remains haunted. This is evident in the very first Annabelle film.
In the first Annabelle film, We follow the Form family as they are their neighbors who were the adoptive parent of Janice. The Forms have a collection of dolls, including the haunted Annabelle doll. The Annabelle doll goes about her business and gets another soul, and the demon is happy. We return to The Conjuring, where we discover that the girls given the Annabelle doll later let a monster live inside the beauty again. Then, at this point, the Warrens take possession of and keep the trapped Annabelle doll.

Films on Netflix now cover the horror genre. What horror movie will you go to this week?

Escape the Ordinary: Why Escape Rooms are the Perfect Team-Building Activity

What is Palm Kernel Oil?